Nadia G’s Bitchin’ Kitchen is a TV series airing on the Cooking Channel, and based on the hugely popular online series.  This is not your typical, run-of-the-pepper-mill cooking show, so if you want to learn how prepare a traditional meal, this is probably not where you would tune in. In fact, there is not a whole lot about this program that is traditional: think in terms of a mash-up of a fast-paced, highly entertaining cooking show, comedy routine and social commentary. With Nadia, you never know what’s coming next, both in terms of the show and great recipes!

Nadia Giosia is a gourmet chef and a bodacious comedian who shows her viewers recipes that are way outside of the (microwave) box. If you want to throw a uniquely themed party or try something off the wall to get your guests’ attention, tune in here for ideas. Like the show, the recipes and the food you can create with them are bound to lead to some entertaining dinner-time conversations.
How about some Drunken’ Spaghetti? It’s spaghetti with a “Bitchin’” twist, cooked with red wine, anchovies and crushed chili peppers. She also has recipes for I Want To Marry You Cookies and “Break-up Brunches.”

Her kitchen is uniquely themed and features an array of Elmira’s Northstar appliances in Candy Red, including a range, wall oven and refrigerator.  The fun, unique Elmira Northstar appliances fit Nadia’s personality and add flare to her already funky kitchen. The kitchen is also crammed with quirky knick-knacks and adorned with miss-matched cabinet door knobs. Miss G also dresses to match her kitchen in ever-changing styles. One day, she may have on a bright red dress with stiletto heels and the next, overalls and a t-shirt.

If you enjoy going against the flow and getting away from the mundane, this show is for you. Also, the Elmira appliances bring a splash of nostalgia to Giosia’s kitchen; a feeling that is not often found in today’s busy world.

Nadia is joined on the show by other quirky characters, Ben Shaouli, Peter Koussioulas and Bart Rochon. Together, the cast brings viewers laughs, fun ideas and great recipes. Giosia also has a two cookbooks published, Bitchin’ Kitchen Cookbook: Rock Your Kitchen- And Let the Boys Clean Up the Mess, and Nadia G’s Bitchin’ Kitchen: Cookin’ For Trouble.

Nadia G’s Bitchin’ Kitchen is based out of Canada; and by coincidence, so is Elmira Stove Works. The two Canadian “products” complement each other and pride themselves on being special and unique. 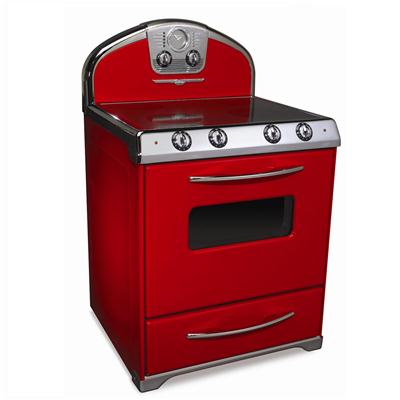 Giosia of course uses her Northstar range and wall oven like any other. The appliances may look old, but they provide Nadia the ability to bake, boil, steam, broil and simmer her new age cuisine in style, in every episode.

You can catch Nadia G’s Bitchin’ Kitchen on the Cooking Channel Wednesdays at 10 p.m. To find out more about Elmira’s Northstar appliances or other Elmira appliances, please visit www.elmirastoveworks.com.