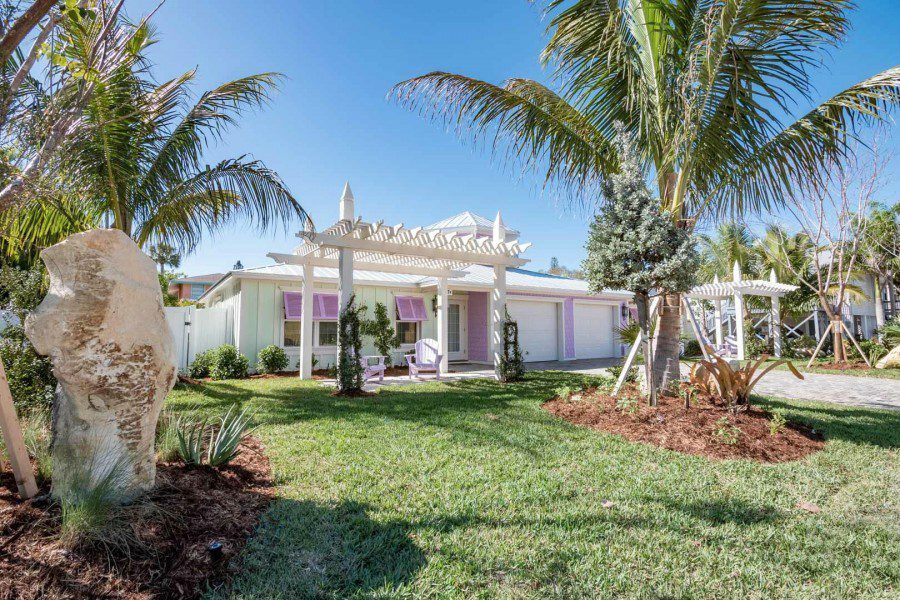 When former CPAs Ben ten Haaf and his wife Keren relocated from Toledo, Ohio to Anna Maria Island, Florida, they set their sights on creating a boutique vacation rental company. Since 1985, the ten Haaf family has had ties to Manatee County (where Anna Maria Island is located), beginning when their grandmother moved to the area, and followed by the arrival of Ben’s parents in 2006. The first cottage, “Flip Flop” was created as a place for family to stay when visiting, and was their first experience with the retro style.

During the economic downturn of 2008, the couple took advantage of the opportunity to buy a group of seven duplex properties located near the Gulf of Mexico. It was the purchase of these properties that resulted in the establishment of their rental company – named Lizzie Lu’s Island Retreat after their first daughter – which they’ve owned for the past seven years.

Says ten Haaf, “We were a young family at the time, with one child, and renovating and renting beach cottages gave us the time we needed to create a better-balanced life.”

Among the available rentals at Lizzie Lu’s are several sets of duplex cottages, which the couple has extensively overhauled, or constructed.

“Our family started 10 years ago with the Flip Flop cottage, and we have continued to try to maintain the ‘Old Florida’ feel that Anna Maria Island is known for. Many of the homes had a very retro, 1970s look – like you were at the beach but stepping back in time. So we decided to keep a nostalgic vintage theme, but refresh it.”

As part of that refresh, the ten Haafs updated the kitchens in each of the cottages. After considering other brands of retro appliances, the couple selected Northstar appliances from Elmira Stove Works.

Added ten Haaf, “We really liked the Northstar line because you could get the whole coordinating suite. We were impressed with the way the line tied together all of the appliances very nicely.”

The couple also appreciated that Elmira offered refrigerators in different styles and sizes, along with all-electric ranges, since they don’t have gas on the island.

Each cottage features a different color theme and is adorned in a mix of soft pastels and sunny hues. Boasting names such as Flip Flop, Gumbo, Limbo, Lemon and Lime, the cottages include appliances ranging in color from Robin’s Egg Blue to Buttercup Yellow to Mint Green, and even Flamingo Pink.

“We enjoy the modern features and functionality of the Northstar appliances. But, most of all, we love the variety of colors and the distinctive styling, including the chrome accents and rounded edges,” noted ten Haaf. “The appliances add a new flavor to a kitchen and create a distinctive focal point.”

Many of the guests who stay at Lizzie Lu’s are drawn to the sense of nostalgia they get when they walk through the doors of the cottages. Not only do the cottages feature retro appliances, but they also include special touches such as 50s style barstools and booths.

“A lot of people come back to stay again and again. Our guests really like the kitchens, which complete the retro look and add to the overall nostalgic experience. The appliances make a statement and help our properties stand out from the other homes in the area.”

The ten Haafs are in the process of building four additional two-bedroom cottages – Salt and Sand, and two yet-to-be-named properties – each of which will include a full suite of Northstar appliances.

“The design inspiration for the new additions is Key West style, which will be nicely complemented by the retro style appliances,” said ten Haaf.